Stock From Scratch In A Pressure Cooker

Learning to make stock from scratch is a vital step toward producing delicious, nutritious meals.  It took me a LOT of years of cooking to figure that fact out!  I was used to using packaged or bottled concentrate to flavour my dishes and was totally unaware of the taste and nutritional/health benefits of using homemade stock.

On Friday, there was an excellent post on Chiot's Run about the making of stock.  Rather than duplicate all that great wisdom, go have a look!

Because the weather was cool and rainy today, I decided to use up some uncooked beef bones from the freezer by making stock.  You may remember that we bought a side of pastured, grass fed beef recently, so we have quite a few bags of beef bones in the freezer.

Here's how I make stock in a pressure cooker using uncooked bones.  If you are using bones that have already been roasted with meat for a meal, then obviously, you'll be skipping a few of the steps below.

1)  Spread out uncooked bones on cookie sheets and roast them in the oven until nice and brown.  This will give your stock a nice brown colour and give it deep, rich flavour.  If I'm going to turn on my oven, I like to fill it up, so I always do three racks full to make a fairly large pot of stock. 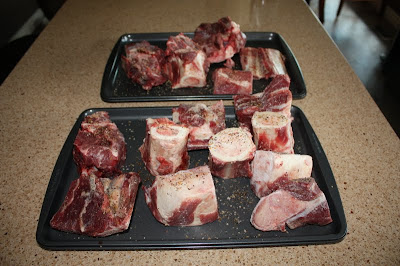 2)  Place the roasted bones in the pressure cooker and pour any melted fat and cooking juice from the roasting pans into the pot. 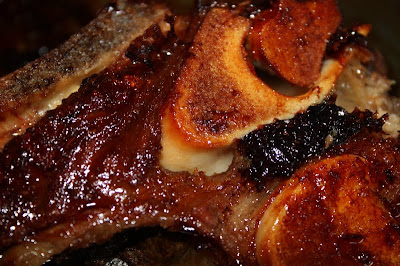 3)  Pour boiling water into the cookie pans and let them sit for about 30 minutes to "mock deglaze" the pans.  I don't want to leave those crusty brown bits on the pans because that is what will flavour the stock!  After about 30 minutes, everything is soft and ready to be scraped and poured into the pot with the bones. 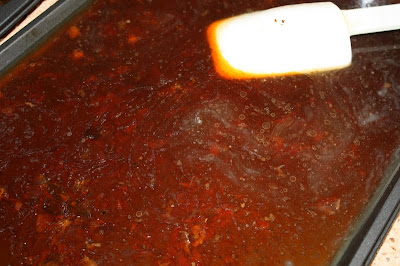 4)  Add a quartered onion or two, some seasoning of your liking, a few bay leaves, and some fresh herbs if you have them. 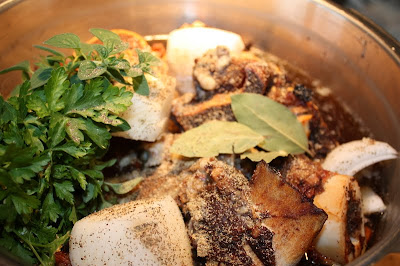 6)  Put on lid securely and bring cooker up to high pressure.  Cook at high pressure for about an hour.   Turn off cooker and allow it to slowly cool on it's own and release pressure naturally.

7)  Once cooled and released of all pressure, remove lid (always lift the lid so that the underside faces away from you thereby directing steam away from your face) and allow to cool a bit for easier handling.

I have so many bones in the pot and many of them are large.  I realize now that I should have cooked this batch for an extra 30 minutes or so.  When I pressure cook a chicken carcass, an hour is plenty and the bones are usually close to disintegration at that point meaning that all the nutrition has been fully extracted from the bones.   It was getting late and I wanted to get the broth cooled off enough to put in the fridge so I left it at that, but you could easily bring your cooker back up to pressure for extra cook time if you don't think they are cooked down enough.  I have tucked aside some of the larger femur bone pieces for the dog as they have some marrow and meat still attached - he'll be so happy!

8)  Strain stock by pouring through a sieve.  Don't forget to put a large pot or bowl under the sieve to catch the stock (don't ask how I know this, lol!).  I usually pick the meat off the bones and put it into the soup (if I am making soup with the stock), or freeze it for another dish.  Either that or the chickens get a nice treat if there's not enough meat to bother with freezing it. 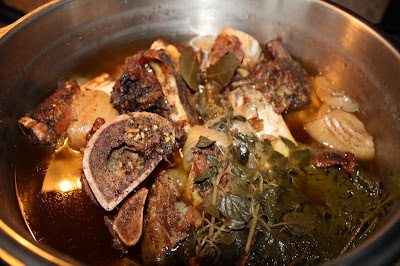 9)  Now you have an incredibly flavourful, nutritious stock ready for use in soups or general cooking.  I taste it at this point and add a little sea salt if needed.  We are trying to reduce our sodium intake, but a little salt does bring out the natural flavour of the stock.  Remember to add salt in small increments and stir it very well before you taste it again so that you don't end up with over salted broth.  You can further reduce your stock (make it more concentrated) by simmering it uncovered for a couple of hours if you wish. 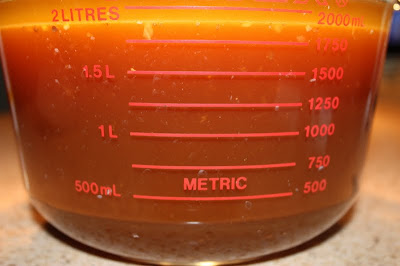 If you aren't using your stock right away, cool it a bit and then refrigerate it overnight before freezing.  Overnight refrigeration allows the fat to harden at the surface if you wish to remove it.  This is much easier than trying to skim it off the top when in liquid form.  Personally, we leave some of the fat in, as we believe that the fat from a lean, healthy grass fed pastured animal is of benefit to our health.  It's your choice, though :) 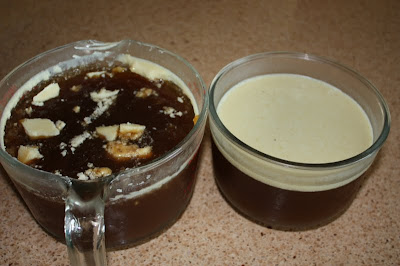 When you make homemade stock, the resultant broth is jelly like and thick when cooled, not pourable like store bought broth.   It means that there is more gelatin in your broth which is excellent for your health. 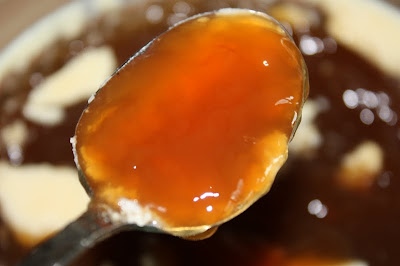 I freeze leftover stock in quantities of 1 or 2 cups which works well for me but if you are a small family, you may want to freeze in smaller quantities (even ice cube trays!) 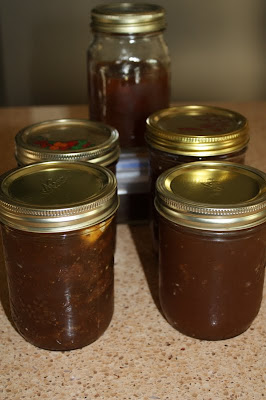 You can also make stock from chicken carcasses as the process is exactly the same.  I always prefer making stock from bones that have been roasted because I prefer the taste to boiled raw bones but try it both ways and decide for yourself.