Soldiers all in a row

Sometimes, you just have to take a risk to realize a benefit.  We've had an unseasonably warm winter and while I'm not naive enough to believe we have a TRUE early Spring on the horizon, I'm fine with losing a few dollars worth of seed on the chance that I just might get to harvest some homegrown greens in April.  I'm probably going to be sorely disappointed, but a girl can certainly try, can't she?

The greenhouse was 100 degrees yesterday and that was all the kick in the rear I needed.   Over the last few weeks we had been shovelling snow into the beds in the greenhouse in the hopes of irrigating the soil in preparation for seeding.  That worked well and the soil was as ready as it was going to be so I bit the bullet and seeded some winter lettuce, spinach, radish, winter cress, kale and mustard greens into 3 cold frames (which are currently enjoying a toasty warm vacation in the greenhouse).  I watered the seeds in with a mixture of worm wee and water then I tucked those cold frames in under a roll of  6ml poly film (leftover from our house renovation).    It's folded in half on the roll, so it's 2 layers thick (which should give decent protection from hard frosts).  There's that optimism again! 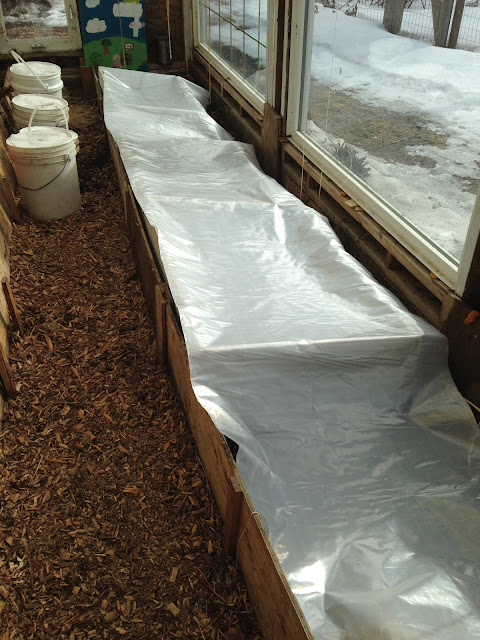 I talk about season extension a lot because it's a game changer for those of us living in a Northern climate.  This workhorse of a space is far from beautiful, but it glows gorgeous to me because it gives me peace of mind via shoulder season protection.   The snow seen through the glass reminds me we are still in winter (and heck the garden beyond the fence is deeply under snow), but we've had lots of warm temperatures lately and the snow is melting quickly.  Night time temps are still well below zero so we are a long ways off from actual last frost date (usually the third week in May) but like I said, I'm willing to risk it.  The time it took to seed and water was minimal (maybe 15 minutes) and the total seed cost was a few dollars.   I can live with losing that investment.

Can you see the buckets in the top left of the picture?  Those are a few from my ultra high tech winter water harvesting system :)  We simply shovel snow into the buckets and haul them into the greenhouse in the morning (when it's starting to get nice and warm in there).  The snow has a full on identity crisis as it quickly transitions into warm water.  In a hot greenhouse that takes no time at all!  The extra benefit of those warm buckets is that they provide thermal mass.  Those buckets stand like protective soldiers radiating heat out through the cold night which might not seem like it would be enough, but when a long row of buckets lines the greenhouse, that's some serious heat to get those wee plants through the night.