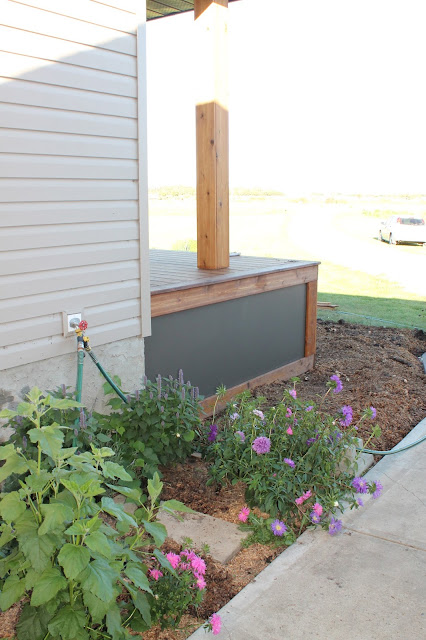 The front verandah project is coming along...  I've been painting a lot of trim and other things outside while the weather is warm.  Fingers crossed it holds! 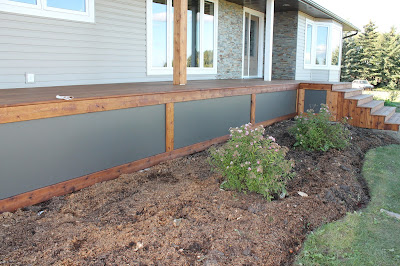 This garden area in front of the verandah is FULL of weeds and is compacted from all the disturbance of construction.  I've put a healthy layer of compost on top of it and have included some wood shavings for boosting the fungal component of the soil.  I'd like to plant this area to a combination of veggies, herbs and flowers next year so in preparation, I've heavily seeded it to a fall rye cover crop.  The rye will outcompete the weeds and add fantastic biomass to the soil when it's mown down.  Fingers crossed that it works because it's already all sprouted!  I've never seeded fall rye as a cover crop before, so this is a good learning experiment.  I'll keep you updated. 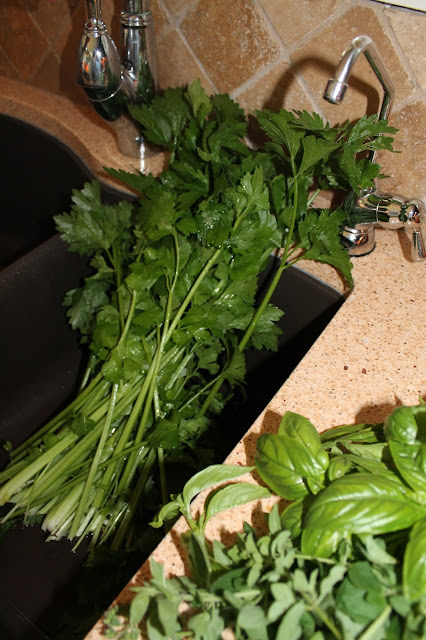 I've got WAY too much celery in the garden, so I've been bartering some and prepping the rest for the freezer.  I think those little bags of chopped celery leaves will be great for flavouring winter soups and stews. 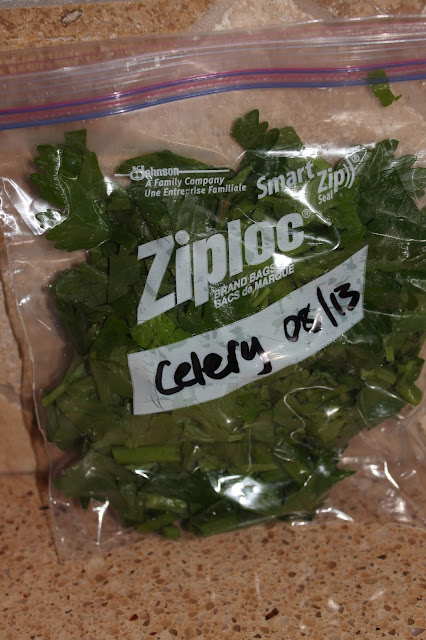 Our apple trees are giving in abundance for the first time ever!  They are SO sweet, crisp and juicy, none of us can stop munching on them.  At this rate, I'll not have to worry about storing them because there won't be any left! 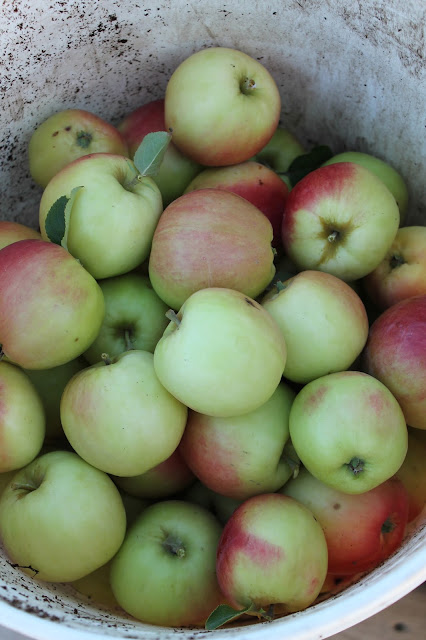 My summer sowing of peas is nearly finished producing.  It's a little hot for peas right now, but who knew we'd have such glorious weather with warm nights in early September?  The cucumbers are growing well, too - these long greens are awesome eaten right in the garden but have also been making their way into school lunch boxes.  The pickling cukes are fermenting jars as I type :) 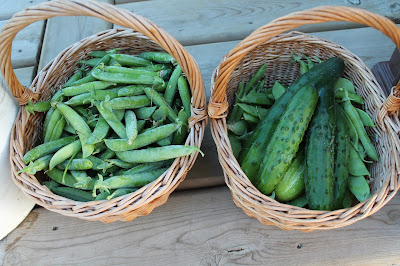 With a little strategic planting, I've managed to keep us in greens without much of a hot weather gap.  With this sudden heat wave some of the lettuce is bolting, but that's ok...  I won't have to seed next spring! 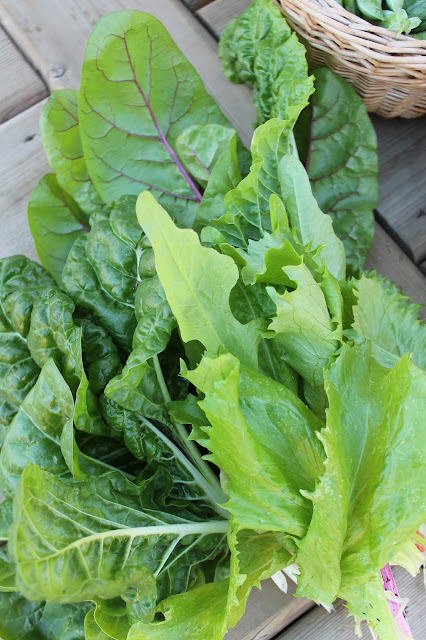 With the exception of the sweet peppers (ours aren't ready yet!), our supper salads are gloriously garden born.  Herbs, lemon cucumber, tomatoes...  mmmmm so tasty and fresh with intense flavours - a real highlight of the season for us. 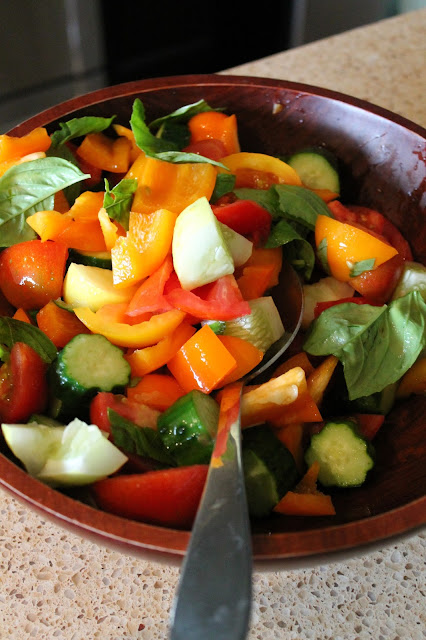 In other news of bounty, a friend works part time at an organic farm and had some extra produce to barter...  This huge box of beet greens was slowly washed, trimmed and blanched, 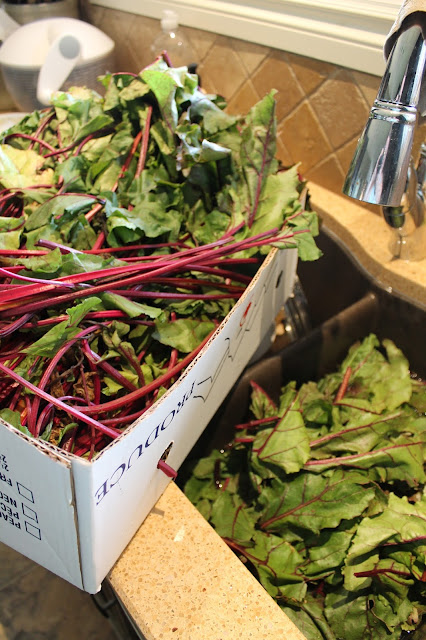 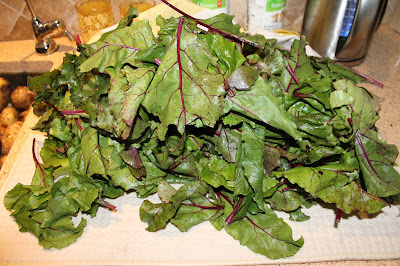 then dehydrated and pulverized into powder for winter smoothies.  While it's easy to forget in this time of nutrient dense harvest, winter colds and flus are best held off with stellar nutrition.   Hope this works! 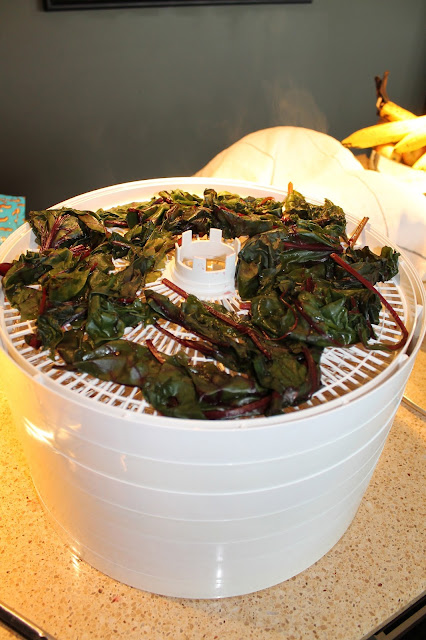 That same friend also bartered a big box of organic potatoes for my canned applesauce and fresh bread still warm from the oven.  Good deal, I say! 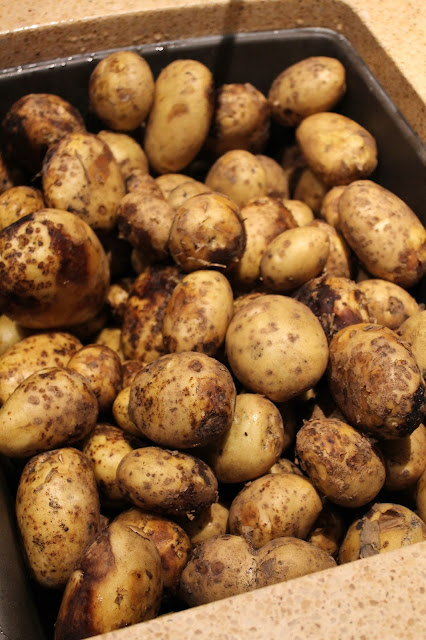 I peeled, chopped and pressure canned them all into jars ready for winter hash browns.  Before I canned the whole lot, I tested a jar and BOY were they good when fried in a bit of lard from our pastured pig!  Healthy fast food for winter that will make Sunday morning "fry ups" easy peas y.   All in all, I have 2 dozen quarts put up - worth the time and effort, I think. 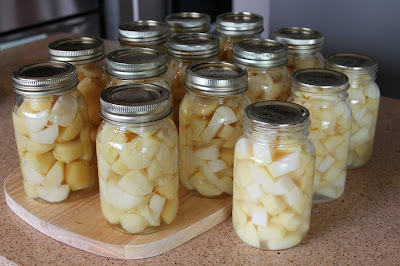 I'm nearly done painting the garage doors and the concrete parging on the foundation.  The place is finally looking "together" and "finished" after 4 years of renovations.  Now, for the GREAT tomato harvest...  stay tuned!