My previous methods of composting were rather haphazard as I was doing it by guess and by golly (which meant that I ended up producing "not quite compost" as opposed to COMPOST).  I'm still learning, but feel more confident now about how to go about it with some help from this handy  Compost Calculator.  It's pretty cool - you can change the amounts of each material you have or want to use and you end up with the right ratio/mix to create the kind of compost that you need.  It's really easy to get the ratios right with this little tool, so give it a try.

We use deep bedding in our coop over winter so we end up with a large quantity of hen manure mixed in with lots of different carbonaceous materials come Spring.  It's partially decomposed when we shovel it out of the coop, but nowhere near "finished compost" status.  All of that manur-ey bedding needs to be properly composted to ensure that we kill off pathogens and mellow out the "heat" of the chicken manure (which is a really HOT form of nitrogen).

I learned something recently which made me realize that I've NOT been thinking...  We had previously been sprinkling diatomaceous earth in our coop to help prevent mites but (duh), that stuff does the same thing to the microscopic critters in the soil food web!  The very biology that I WANT to thrive and grow in my compost don't stand a chance when I'm liberally sprinkling that stuff all over the coop.  That precious coop muck is the foundation for my compost which ultimately feeds my garden, so let me tell you, that practice stopped in a big hurry!  I am still concerned about mites, however, especially with a large flock that spends a lot of time confined to the coop in winter.  My research led me to some interesting findings... 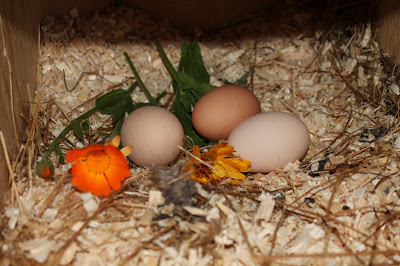 Herbs for chickens  to prevent lice and mites

Check those links out - what an education!  The herbs will decompose and not pose a threat to the soil food web in my garden.   I'm hopeful that herbs will be the answer to mite prevention - stay tuned for the results.

Back to the compost pile... 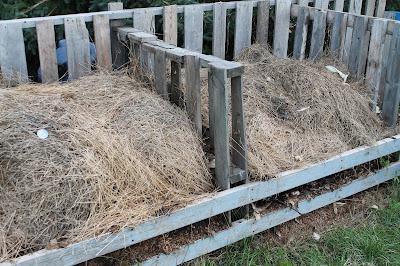 This 3 bay compost bin was FULL TO THE TOP in all 3 bins when we cleaned out the coop a few months ago.  We layered the coop muck (which was comprised of manure, wood shavings, shredded cardboard and paper, alfalfa and straw) with some green weeds and some small twigs and filled all 3 bays.  We watered it all in well, covered it up with straw, pushed the compost thermometer in and crossed our fingers!

Up, up, up went the thermometer right into the HOT side of the active range for a good solid week to 10 days which was excellent!  I watched closely to make sure the temperature didn't surpass the safe zone and start killing off the soil critters (it didn't).  Slowly, the temperature came down to the low end of the STEADY zone which meant  it was time to turn the piles (which at this point had shrunk by 50%). 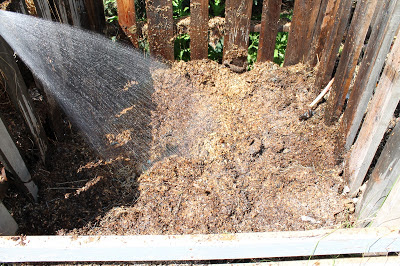 I removed the straw covering and set to work mixing in more green weeds, kitchen scraps and most importantly, some forest duff to inoculate the pile with different strains of mycorrhizae and species of soil food web critters.

I watered it all in REALLY well and covered it back up with the straw. 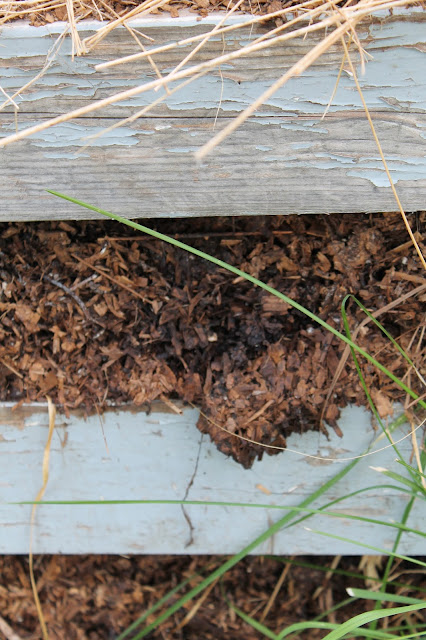 Here's what it looks like now...  getting closer to the coffee grounds black/brown colour and slowly turning into compost (insert smiling gardener's face here).

I'll report back here in a few week time and we'll see how it looks!